My favorite thing about the birth world as a doula is being able to support another Mom as she goes through this the amazing journey to welcome her sweet precious baby into this world. This past weekend was even more special because I was able to support MY doula who had just supported me just 7 months ago. Such a neat experience to come full circle and Doula MY Doula!

The best thing about this birth story was how fun and light hearted the whole day was AND seeing this Mom go deep inside herself and to trust her body, even when things on the outside weren’t going exactly according to the plan or how she expected it to go.

“J” was expecting her 3rd baby, a girl, in the beginning of August 2016. At 37 weeks on the dot I woke up to a phone call at 4 am letting me know her water just broke. She was feeling a little unprepared with how soon everything was happening. Her husband had been up late that night and she just found out her midwife who was supposed to be attending their homebirth was still out of town. Along with that news, that day was supposed to her baby shower. All things she had not planned on or expected. Because of all this she asked if I could come up right then to keep her company and feel more prepared.

When I got there, she was in a happy mood, we talked a little about our game plan. Contractions were very light and not very close together. We decided to pass the time by putting final touches on the baby’s room, getting her close ready and cleaning it up a bit. “J” sat on the birth ball, while I helped in the room and we chatted. After that was done we decide to go on a walk around the block. My favorite part was watching her play pokemon go between light contractions and chatting.

When we got back to her house, her mother in law was there. We all went inside and hung out. Since things were about the same contraction wise, we discussed the possibility of her going to her baby shower, even if just for a little bit.  We decide we would see how things were in about an hour. In the meantime, I made her breakfast, she chatted with her mother-in-law, and then took a quick shower.

An hour later things were more or less the same thing, especially if she was sitting on the birth ball contractions were further apart; 7-10 minutes and fairly light. So, we decide that is should be fine for her to go to the baby shower. Together her and I drove up to her baby shower.  The best part was that no one, beside her mother-in-law, knew that her water had broken earlier that morning and that she was having contractions the whole time.  At one point they were doing a guessing game of when everyone thought baby would be here and “J” had to tell everyone to make sure they guessed soon because her water had broken already, everyone was shocked.

After the baby shower was over we got back to “J’s” house and things still hadn’t changed. In fact, “J” was able to help get her boys lunch AND give them haircuts! Since things were still very mellow we decide that “J” should go rest upstairs, try to take and nap and get energized so that when things did pick up she wouldn’t be too tired. I headed home to rest while “J” rested and told her to keep me posted if things changed.

After only being gone a little over an hour “J” called me to tell me things were picking up. I quickly headed back to her home. When I arrived “J” was in her room very much in active labor. She was on her knees leaning against her birth ball. With each contraction, she would go within herself, humming and swaying from side to side. After each contraction, she was light hearted and talking to everyone that was in her room.  Even at this point when we would time the contractions they still were anywhere from 4 -10 minutes apart, the only thing that really changed while I was gone was the intensity. “

About three hours of active labor “J” got into the birth pool, she was in there for maybe 15 minutes before she was ready to push. After a short time of pushing, maybe 10 minutes her sweet, calm baby girl was born into her momma’s hands. 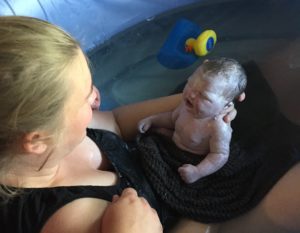 Sometimes birth just doesn’t go exactly as we imagine throughout our pregnancy. This seemed to be the theme of this birth.  “J” had to change her birth team both during her pregnancy and while in labor. Her water broke sooner than she expected. Her contractions were so unpredictable even up until the end. Through it all she had a great attitude and birthed a beautiful baby girl. I hope that all moms can come to the realization that things may not go as we plan. You can still do this. You can still have a positive and empowering birth.  This momma taught me a lot, and I am so grateful I could be there as her support. Hello CEO is the perfect onepage theme for the Lady Entrepreneur. Use it to highlight your portfolio, products, services or show off your blogging skills. Gorgeous styling & tons of flexibility.